55 Years of Science and Technology

The Minister of Industry and Technology Mustafa Varank made a speech at the 55th founding anniversary ceremony of the Scientific and Technological Research Council of Turkey (TÜBİTAK). In his speech, Minister Mustafa Varank told that all related and affiliated institutions of the Ministry, especially TÜBİTAK, would lead Turkey's technological and digital movement. Minister Mustafa Varank also emphasized that TÜBİTAK undertakes a very big mission in Turkey’s science and technology policy making and has important tasks together with universities that are expected to lead the knowledge production in the new period.

"We will mobilize TÜBİTAK’s entire accumulation for Our National Technology Move which will lead us to reach Our 2023 Goals. We will put our arms in order to create a flexible and dynamic Institution”

The Minister of Industry and Technology Mustafa Varank explained that the world has undergone a great transformation and the center of this change is the technology that is nourished by science which is no longer sufficient. Minister Mustafa Varank, who pointed out that industrial countries are making plans to pass on the concept of industry that is nourished by technology: "We also have to put this understanding in the center of our development policies, so we will consider the new era of knowledge, technology and industry as mutual stakeholders and strategic partners. Therefore, we will take science, technology and industrial policies in the same level that constitutes strategic cooperation among them. In this new process, TÜBİTAK takes place at the center of our future plans. The Minister also emphasized that “We will mobilize TÜBİTAK’s entire accumulation for Our National Technology Move which will lead us to reach Our 2023 Goals. We will put our arms in order to create a flexible and dynamic Institution”.

The Minister of Industry and Technology, Mustafa Varank, drew attention that all the production processes have been significantly changed through Fourth Industrial Revolution and added that "This new period brings new concepts. Many innovation steps such as digitization, the internet of things, cloud computing, big data, new industrial internet applications, robots, smart factories, artificial intelligence, sensors, 3D printers, etc. are seen as the areas that will shape future of humanity. Production processes are getting smarter. Reminding that the world's fastest growing and stability-capturing institutions are coming from technology companies, The Minister of Industry and Technology Mustafa Varank said that those who devote more resources to R & D, innovation and digitalization multiply their gains. The Minister also stressed that the conventional methods lost their validity during the new industry and production period which were replaced by high technology, R & D, design and branding and added that "We will pave the way for high-tech and value-oriented production concept. For Turkey, the 'industry's new route will be digitization'.

The digital breakthrough process will be one of the most decisive elements of the forthcoming period. All actors of production and marketing will take their share of the digitization process. In this sense, The Ministry and TÜBİTAK have to take an active role in this process. In particular, we will prepare new support and incentive packages for our SMEs to get more share from the digital market. We will continue to direct KOSGEB and TÜBİTAK support to technology-oriented initiatives and SMEs. In order not to fall behind in digital competition, we will implement rigorous and planned studies on issues such as establishment of infrastructure, R & D activities, increase of qualified human resources."

"We will open up the doors of TÜBİTAK"

The Industry and Technology Minister Mustafa Varank said that policies regarding all areas of industry and technology will be determined by the understanding of the national technology, taking into account the needs of the digital industry. We aim to see science and technology as the main road that will bring our country to future and we do not have the luxury of stopping, relaxing and slowing down this way. To transform our ability to produce scientific knowledge into economic and social benefit, we will work and get tired." The Minister Mustafa Varank expressed that TÜBİTAK will be organized as one of the most important instruments of the information production process and added that "TÜBİTAK is the first to simplify and update itself in the rapidly changing and transforming world. We will build TÜBİTAK as a solution partner for our companies, scientists, students and researchers. We will shorten the processes in R & D incentives and support programmes. We will highlight the product and result-oriented support mechanism and open the doors of TÜBİTAK for our qualified human resource."

Minister Varank made evaluations on Science, Technology and Industry policies in the new period and noted: “This new period is the period of breakthroughs in science, technology and Industry. During this breakthrough, the new Presidential System of Government will blaze new paths for all sectors, minimize bureaucratic processes, solidify institutionalization and accelerate decision-making mechanisms. In the new system, we will exert maximum effort to ensure the participation of all stakeholders. The presidential system of government will accelerate our 'production-oriented' industry policy. Likewise, we want TÜBİTAK to have a much more functional responsibility in our technology and Industry breakthrough process, and to become an institution that produces new projects, makes inventions and shapes our future in these areas. TÜBİTAK’s accumulation is Turkey’s accumulation. TÜBİTAK’s power is Turkey’s power. We will work hand in hand with our valuable scientists, universities, researchers, entrepreneurs and move our country further with science.”

TÜBİTAK President Prof. Hasan Mandal spoke at the "TÜBİTAK’s 55th Anniversary Ceremony". Recalling that TÜBİTAK has carried out important studies since 1963, Prof. Mandal said that the institution has made important contributions to Turkey. Prof. Mandal stated that personnel who has worked at the Institution for 25, 30, 35 years or more will be presented with plaques for the first time on the occasion of the 55th anniversary of TÜBİTAK’s establishment and that they wish to make this a continuing tradition. He also wished Minister Varank success in his new duty. The President of TÜBİTAK continued his speech as follows: "May the 55th anniversary of our institution bring luck and success to all of us. Even though it might be considered as a short amount of time, 55 years is a significant period of time for an institution, taking into account the ages of other institutions in the Republic of Turkey. TÜBİTAK has undergone a difficult period during and after 2012 and became worn out during the set-up of the FETO structure and the coup attempt. Therefore, the institution could not adequately fulfill the tasks expected from it. Hence, our duty during this period will be that much more important and on the front agenda."

Referring to TÜBİTAK as the most important institution supporting research and researchers at all levels since 2003, Prof. Hasan Mandal stated that with the support provided, universities and industry have learned to do research and even developed their research capacities. TÜBİTAK President said: “TÜBİTAK has contributed to the increase in both quantity and quality of our scientists of all ages. I am one of them and I am proud of this.”

Prof. Hasan Mandal pointed out that when TÜBİTAK’s processes are evaluated as a whole, they have provided significant support for the formation of research capacity so far and has made serious contributions to this process. In his speech, the President of TÜBİTAK said: " It is not possible to obtain output from research without developing research capacity, but now our next goal is to manage the research processes that are focused on the target and output that is expected from us." Prof. Hasan Mandal pointed out that when asked "Which institution supports research and researchers in Turkey?" TÜBİTAK is the first institution that comes to mind, and also emphasized that they are aware of their responsibilities, especially within the scope of the country's 2023 targets. Underlining that capacity building in the research ecosystem is important but not sufficient, Prof. Hasan Mandal stated that the new TÜBİTAK aims to manage the processes in a more target and output oriented manner. Prof. Hasan Mandal also noted in his speech: “Within the scope of the research activities to be carried out in both our support programs and in our centers and institutes, I am positioning the new TÜBİTAK to be output-oriented in the new Presidential System and in the structuring of our new Ministry. As the new TÜBİTAK, our main objective is; to educate qualified people who produce qualified information. For this purpose, a TÜBİTAK, which is responsible for managing research while supporting research, will be evaluated with our outputs and not inputs.” Stating that the proposals of the new TÜBİTAK were developed in this context in the 100-day Action Plan of the Presidency, Prof. Mandal stated, “There are contributions expected from every institution in the 100-day Action Plan, and we have presented our own contributions to our ministry. We know that the majority of them have been approved and submitted to our Presidency.”

TÜBİTAK President said: “As the new TÜBİTAK, we will only be able to reach the expected our countries short, medium and long term targets by working together and succeeding together. In this context, during this new period, we will endeavor to encourage high performance work and contribution through our new human resources operations.” Prof. Mandal also stated that TÜBİTAK has 5115 employees, of whom 2818 are permanent staff and 2297 are project personnel. The President of TÜBİTAK concluded his speech as follows: “There is no doubt that institutions with assertive goals will only succeed with devoted employees who possess high ownership. I would like to thank all my friends who have contributed their services.”

Following the speeches, the Minister of Industry and Technology Mustafa Varank and TÜBİTAK President Prof. Hasan Mandal presented plaques for employees who have been employed at the institution for 25, 30, 35 years or more. 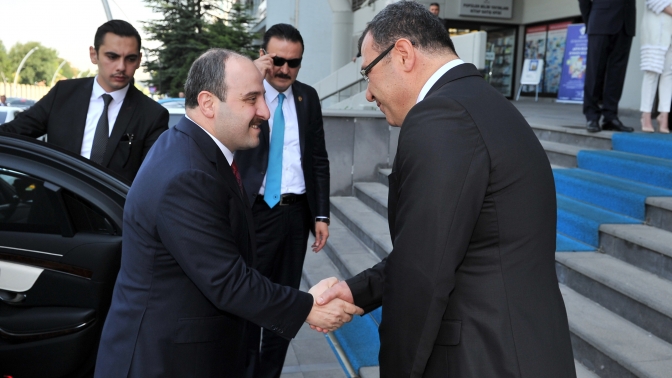 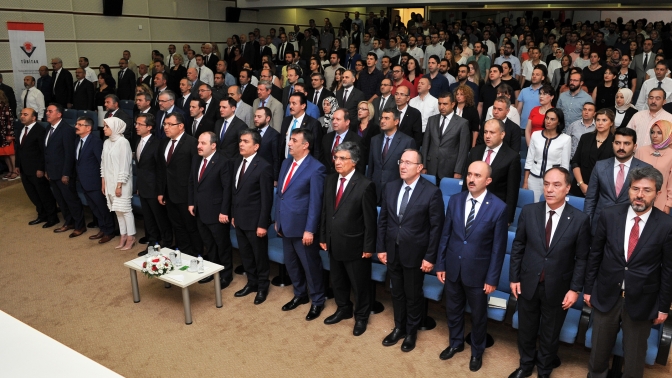 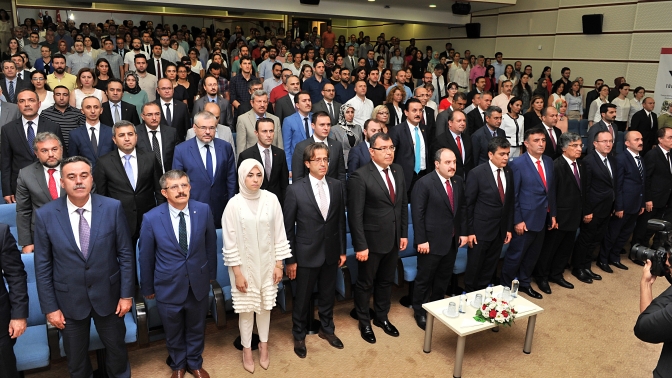 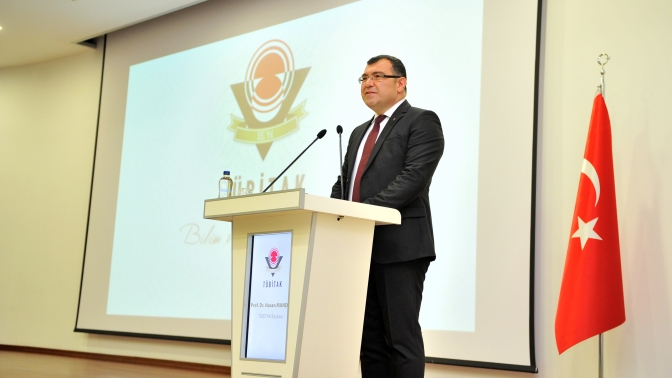 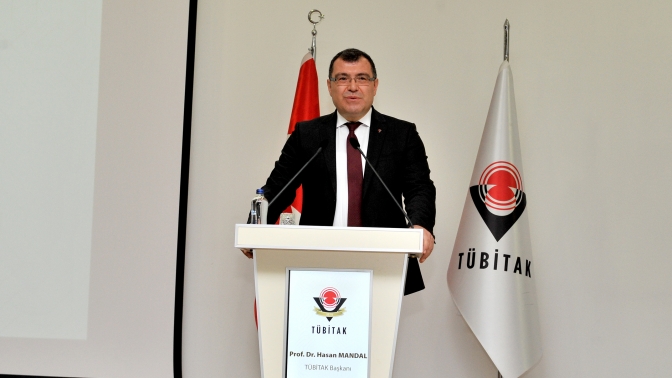 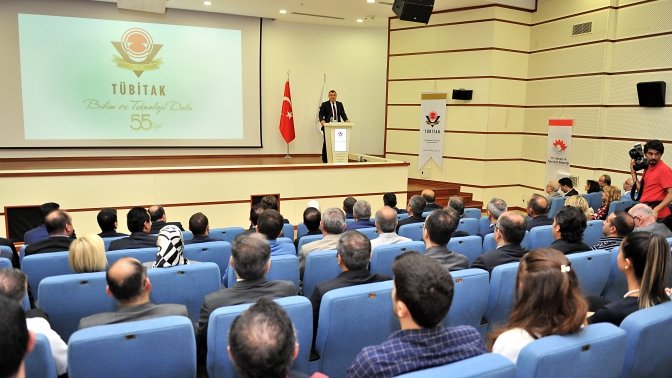 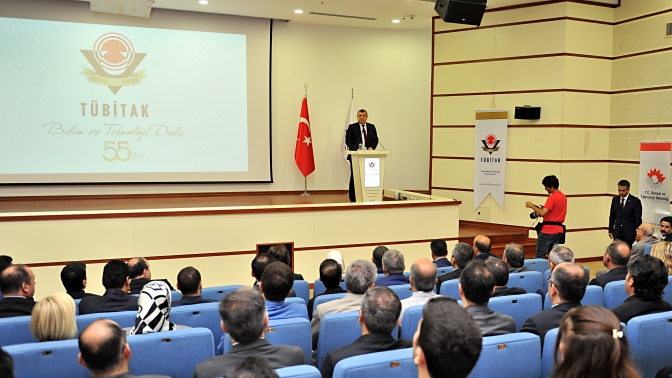 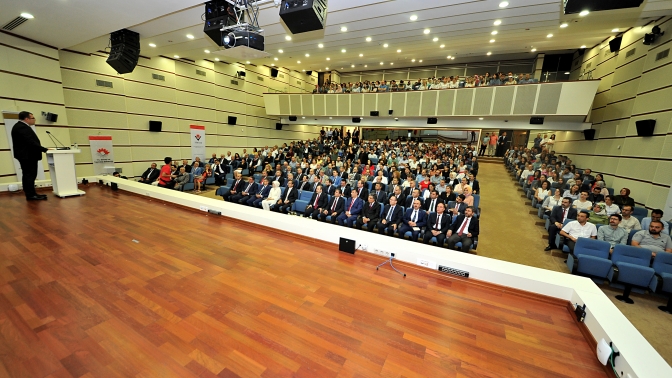 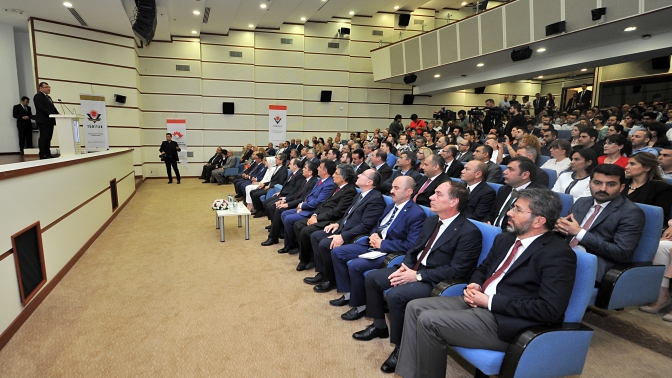 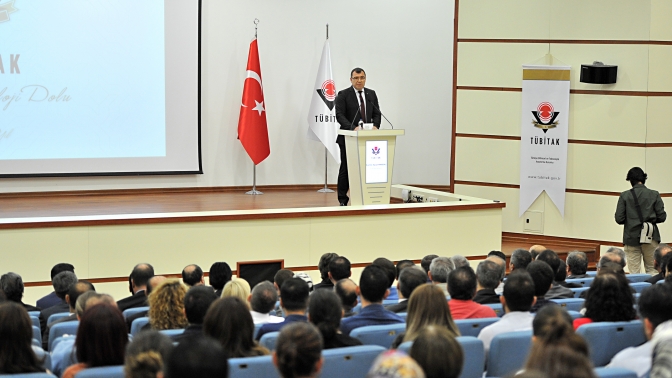 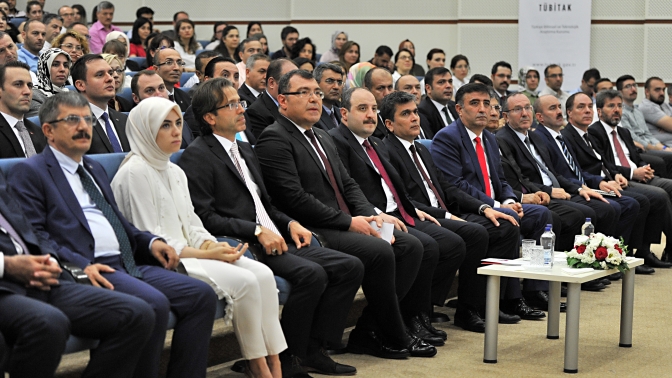 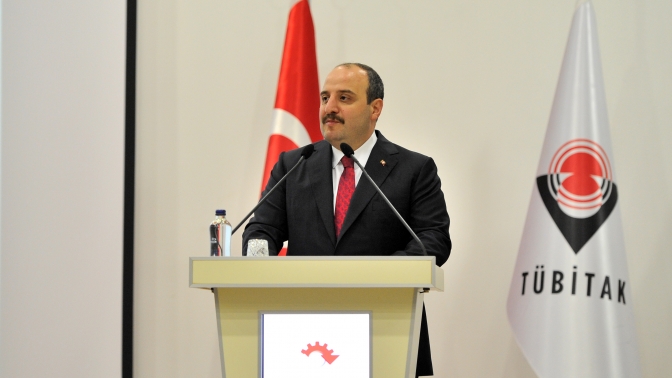 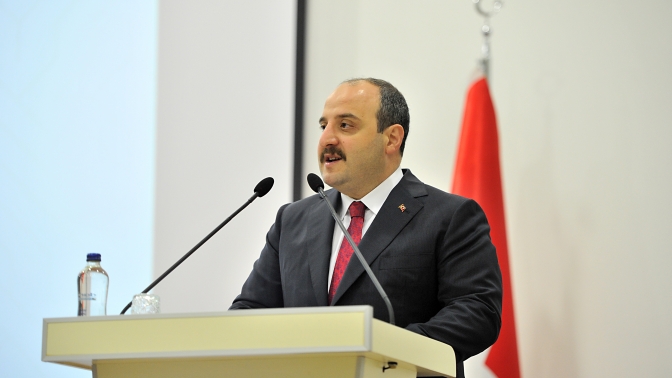 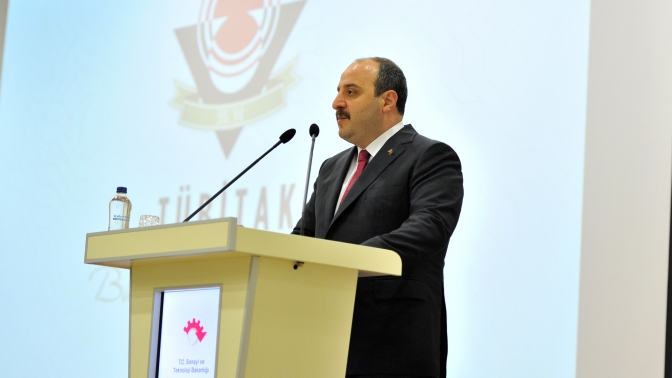 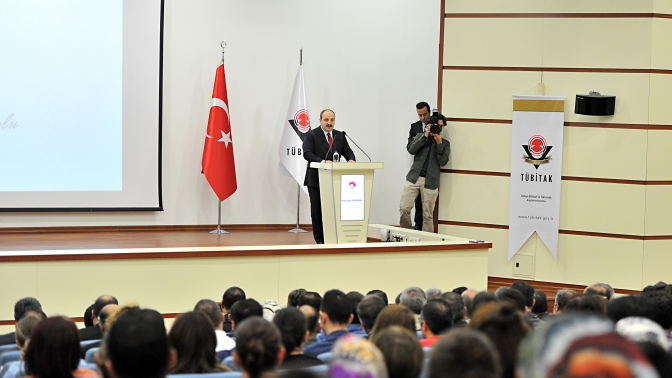 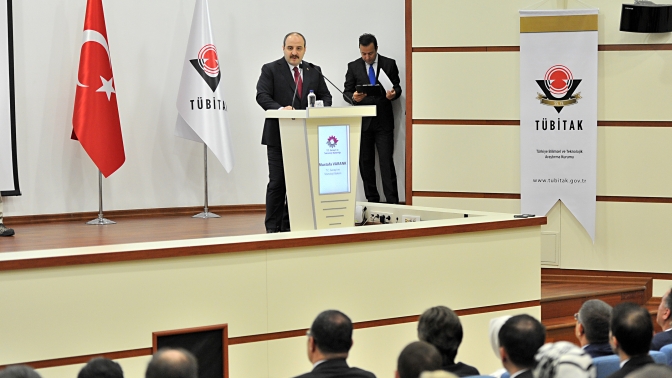 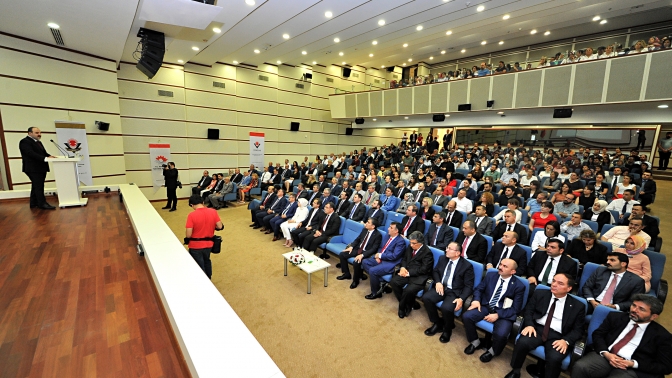 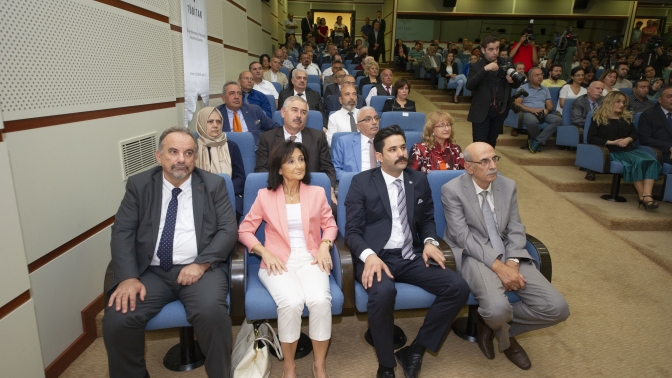 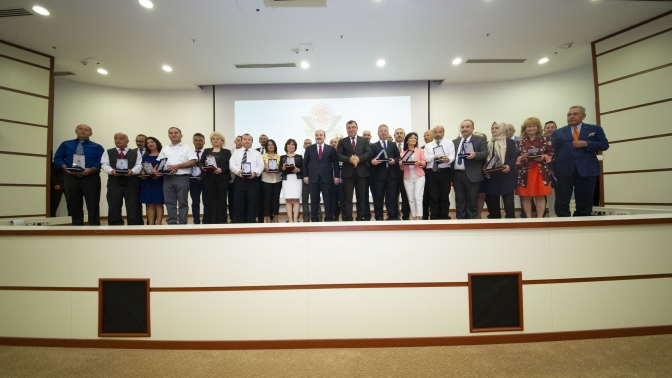 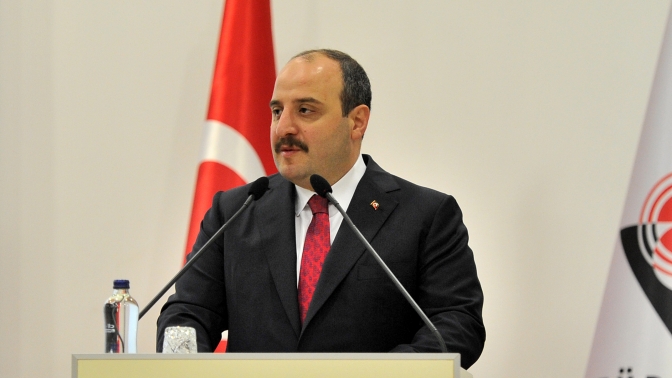 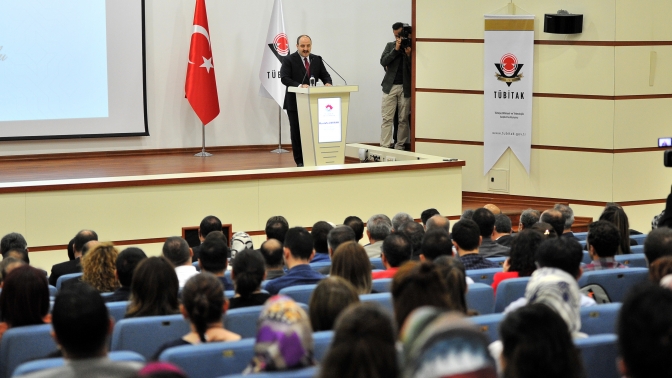 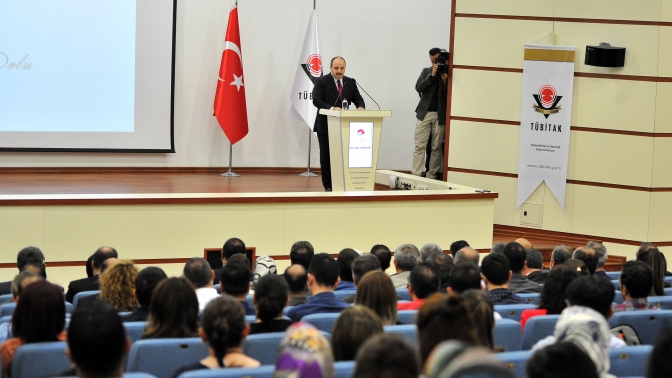 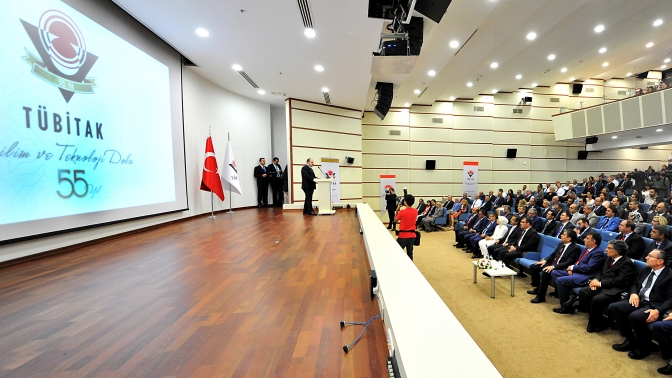 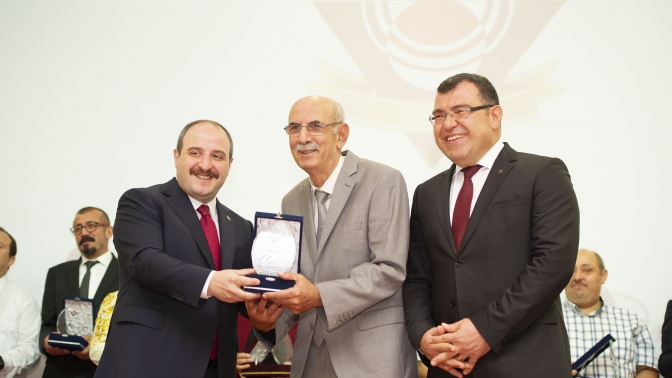